How are drinking water and fish habitat protected in timber-producing forests?

Clean water is crucial to all Oregonians. Most of Oregon’s municipal water originates in forested watersheds, including those managed for wood production.

As rain or snowmelt soaks into healthy forest soils, it is filtered naturally and, over time, flows into nearby streams or groundwater aquifers. Oregon’s forest protection laws are intended to protect drinking water sources and fish habitat by keeping them clear of sediment or chemicals introduced through forest management activities.

The cleaner the source water stays, the better fish habitat it creates, and the less treatment and filtration it will need as it is prepared for human consumption.

What laws are in place to protect water and fish?

Stream buffers: Loggers and forestland owners are required to leave areas of uncut trees and vegetation along the borders of streams, rivers, lakes and wetlands. This rule is most stringent for waterways where fish are present, and those that are sources of drinking water. These areas are called “riparian management areas,” “RMAs,” or simply “stream buffers.” Within these buffers, timber harvesting is either prohibited or severely restricted because leaving trees standing along streams shades the water and helps keep it cool for fish. When trees fall into the water, the submerged log, branches and roots provide anchor points to slow down stream flow, provide cover for fish, and increase complexity of aquatic habitats, which is especially beneficial for juvenile and spawning fish.

The width of these buffers was expanded in 2022, the result of legislation following agreements reached during the Private Forest Accord negotiations between representatives from the timber industry and major conservation groups. Protective buffers along fish-bearing streams were increased overall, and range from 75 to 110 feet in width, depending on the size of the stream and whether it contains certain species of fish.

The Oregon Legislature also passed a law in 2022 that required stream buffers for some ephemeral headwater streams. These are streams that are seasonal, or sometimes present during significant rainfall, but are dry at other times of the year. Oregon law did not previously require forest landowners to leave buffers of uncut trees around these types of streams, but protections for these streams, either in the form of no-cut buffers or a logging equipment limitation zone, were added because they feed into fish-bearing streams and aquatic habitats. The width of the required no-cut buffers varies by stream size and location. The buffer requirements also vary between western and eastern Oregon. 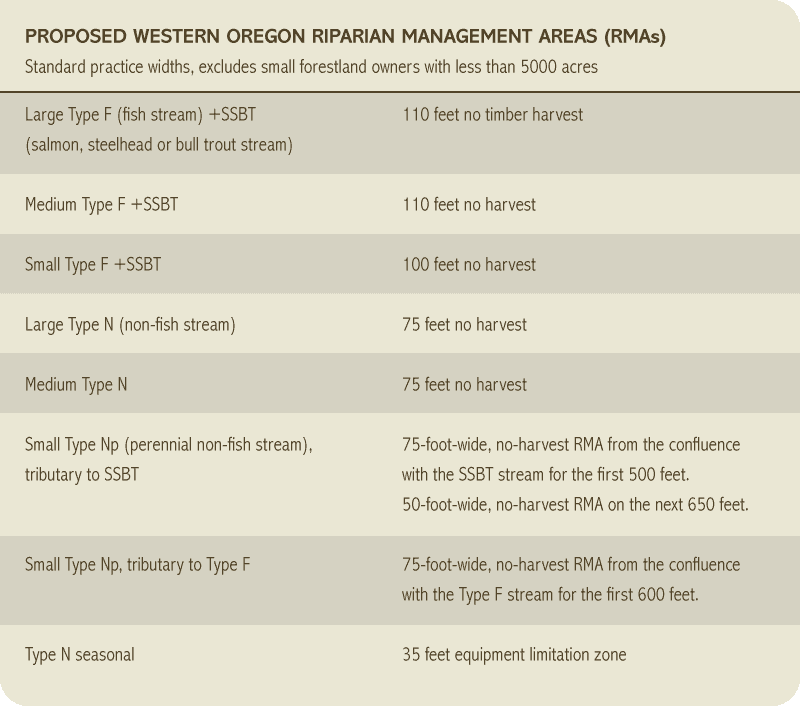 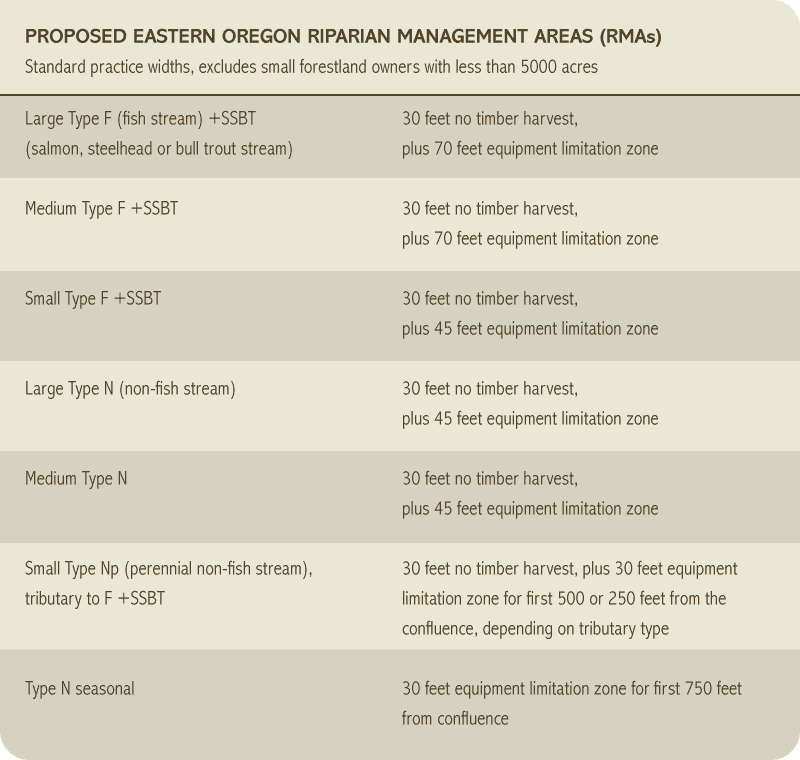 In 2021, with the passage of Senate Bill 1602, the salmon, steelhead and bull trout stream buffer rules were expanded to include the Siskiyou region in southern Oregon after new scientific research showed it would be beneficial to those fish species. When the SSBT stream buffer rules were created in 2017, there wasn’t enough science about the Siskiyou region to apply these wider buffers.

Restricted chemicals: Some forest landowners use chemicals to control unwanted vegetation. The most common chemicals used in the forest are herbicides, a type of pesticide typically applied to an area that’s been logged and will soon be replanted with new trees. The use of herbicides can benefit newly planted seedlings by suppressing other vegetation, which reduces competition for water and sunlight. But herbicides and other chemicals can be hazardous to humans and wildlife, and should be kept away from any sources of drinking water and fish-bearing streams. This is why Oregon law restricts the use of chemicals near drinking water supplies and aquatic habitat.

Laws passed in 2021 increased no-spray buffers for helicopters applying pesticides to a distance of at least 300 feet from schools, inhabited dwellings and qualifying drinking water sources; at least 75 feet from fish-bearing streams or streams with domestic uses; and at least 50 feet from other streams with surface water present.

Threatened and endangered wildlife get special protections in Oregon’s forests, including a number of fish and other aquatic species. Threatened species are those likely to become endangered in the foreseeable future unless conservation measures are taken. Endangered species are those in danger of becoming extinct within the foreseeable future, throughout all or a significant portion of their range. In addition to federal protections, the Oregon Forest Practices Act (OFPA) has rules designed to protect threatened and endangered species in Oregon’s forests.

View a complete list of threatened and endangered species that receive special protections under state and federal law in Oregon.

Fish species addressed in the Private Forest Accord

One of the goals of the Private Forest Accord (an agreement between representatives from the timber industry and major conservation groups to modify parts of the OPFA in a way that expands state habitat protections for certain species of fish and amphibians) was to achieve a federally-approved Habitat Conservation Plan for the following species of fish:

New forest practice laws passed in 2022 as a result of the Private Forest Accord agreement include special considerations for small forestland owners (defined as owning fewer than 5,000 acres of forestland and harvesting less than two million board feet of timber over three years) to offset the disproportionate impact these regulatory changes will have on them. This includes a new tax credit to compensate them for lost revenue if they agree to exclude timber harvest along streams in the expanded no-cut buffer zones, which are optional for small forestland owners, to better protect fish habitat.